Bigger upside down D face then all roads leading to the litter box!

Never wanting me to be devoid of something to write about the boys got picked up and cited by the national parks service today.

The winds were remarkable high when we woke up, so high we couldn’t actually leave the Dry Tortuga’s at all, but cute boys were itching to do stuff. They wanted to get to land. Adam tried rowing the dingy with a long line attached to the stern, lest he be wafted out to sea. He could not. They deliberated a bunch and decided to put the sail rig on the dingy and sail in. I thought this idea was shit and opted out immediately. Searching for adventure, the boys pressed on. They struggled with the sail rig for hours. They couldn’t find some hardware they needed so they took it off parts of our actual boat. They finally got the rig up and the sail on and tried to sail with the line attached to stern, to be sure they could survive in that much wind, but the line impeded progress quite a bit. Even I could see that. I couldn’t believe they were ready to try this but, giggling and yelling like idiots, they told me to let them go and against all my maternal instincts, I did.

It all went so well right out of the gate. They were shooting like a bullet right for the shore, really fast. They made the most wonderful picture. The boat is tiny, the single sail has fat white and red stripes. They were both wearing matching red life jackets and they were laughing hysterically the entire time. 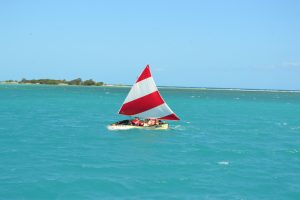 People were coming out of their boats, all having been stuck inside as well, unable to dingy in. The guy on the boat next to us shouted that they were awesome. People were taking pictures of them on land. A guy from another boat later told them that as he watched he was at first jealous and then very, very worried.

It degenerated quickly. They had to tack around one boat and it all went to hell. They struggled and struggled with the sail, they eventually gave up getting to shore and tried to come back to the Talisman. They tried that for a while, my consternation growing all the time. Then they really were getting blown out to sea. As I watched I thought, how long do I let this go on before I call for help? They got smaller and smaller. I could see them struggling. I wondered if I could get the anchor up myself in this wind without running into the ragged old metal pilings 200 yards to our stern. I wondered if I should start the motor. I wondered how long I should wait to activate.

Through the binoculars I saw them start to row. I saw that it was difficult. Then I saw them head toward the beach on the far side of the fort and they disappeared behind the island. I bit all my fingersnails off. A little while later I saw them walking on the beach.

I went back to my painting.

After a while I got a call on the radio that they were coming back, courtesy of the national park service. As the ranger brought them by for me to throw them a line he said, “ma’am, I hate to do it, but I gotta cite ’em.” I threw them a line and pulled them in.

They were still laughing. 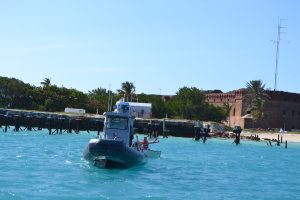 “whadju guys do??” I asked.
They got a $125 ticket for parking the dingy on a swim beach. I asked the gentleman that towed them in what they should have done instead, thinking he would say something along the lines of, well I guess they really couldn’t have done much else but be blown out to sea to eventually eat each other or die. Instead he talked of small craft advisories and the strength of the wind, essentially saying “make better choices”…

I would say the moral of this story is Josie is always right but you should have heard the laughter coming off that little boat as they were blown uncontrollably to impending doom.

We celebrated all of this like good pirates. With rum.