32
Fuck This; An Appalachian Tale.

I heard a person walking around the camp. His footsteps came closer as he stumbled around. I listened, wide eyed and immobile. I heard the unmistakable sound of him unzipping his pants. And then a stream against the tent. I pulled my legs into my body and away from that side of the tent. Quickly he stopped peeing, zipped up his pants, unzipped Adams tent door and as his dark, steamy hand came down to grab my beautiful husband I shot forward in my bag. I was sitting, I went to fight him off and there was no one there. Adam rolled over. My breathing was coming in hot wet gasps. I was drenched in sweat. I checked again. And then again, The rain fly was in place. the tent door wasn’t open, there was no strange hand inside my world.

I threw the moist sleeping bag off of me and immediately realized how cold it was. I covered half of my slimy body with half of the slimy bag and sat there waiting for the adrenaline to pass. Not again. Every night it would be some different, situationally appropriate semi-nightmare. I felt nauseous. I knew I hadn’t been asleep long. And I knew I needed it badly, but I just could not shut it the fuck down!

So I read for a while. Probably right around the time I fell asleep I was awoken by a man very close to our tent call to someone else in an unnecessarily obstreperous voice, “MORNING, I’M READY TO HUMP THIS SHIT OUTTA HERE!” Effectively waking up all of the twenty people sharing the woods with him in one fell thoughtless swoop.

Adam leaned over and kissed my salty neck. “Good morning,” he said with his cheek on my hair and his arm around my body. He sat up. I whimpered. I wanted him to lay back down. I wanted the men, whom I actually found that I hated, to lay back down. My sore, crippled body wasn’t done resting. Had barely begun to rest at all.

Adam left the tent. I pulled my bag tighter around my head. It wasn’t even light yet. Were they all insane?? Why wouldn’t they shut up?? Didn’t their moms teach then ANYTHING about what to do when people around you are sleeping?!?!

I laid in the tent, listening to one cricket and five men. Then six, then seven and ten and fifteen. My body was sweaty, but cold. A horrible combination.

I finally got up. There were too many of them to fight.

Everyone was in various stages of rolling pads, stuffing bags, and collapsing tents. Everyone moved with purpose. Some were by the fire drinking coffee but even they were moving energetically. I felt like I was underwater.

I sat down to try and eat. Thinking I was a normal human being that morning, Adam took the bag of granola out of my hand to share with me. When he was done with it he absentmindedly set it on his pack on the other side of him. I took out a salami from my pack next to me and began to cut pieces off, again he reached over, took the salami to share with me but then distractedly didn’t give it back. I was too tired to try again. I felt sad.

“Can you take the water today?” he asked, as he eagerly put things into his pack and stuffed things down and cinched things up. I looked at the clear heavy-duty plastic bag that held the water. He had just hiked down and filtered it from the stream a quarter of a mile away. The liquid swayed from one side of the bag to the other. It would add four pounds to my pack. I took it in my hands. It wobbled from one hand to the other as I stared at it. I held it over my pack. I dropped it in. 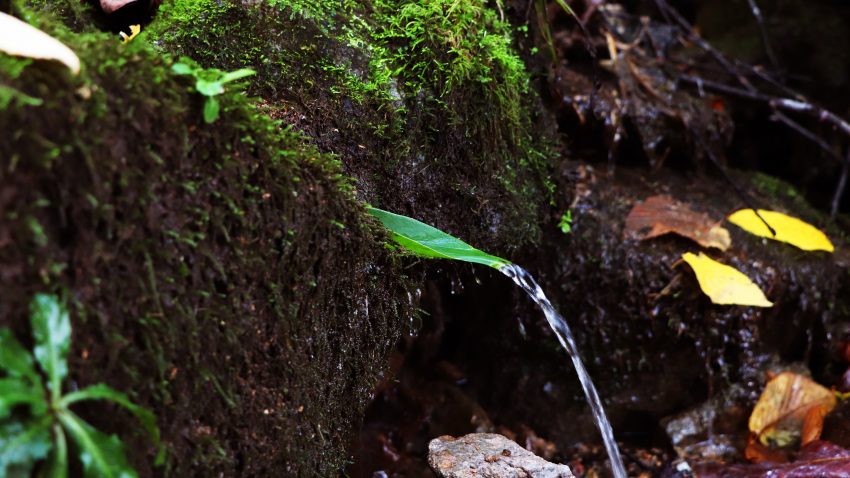 “It was a pleasure meeting you all,” I said to Wee and the guys. I was too tired to smile so I squeezed his arm as I passed. Then I followed my light bulb of a morning person out of the campsite.

I put one foot in front of the other. Then I did it again. Then I did it a hundred times. And then a hundred more. My legs surprisingly didn’t feel sore. That would come the next day. And it would come like a god damn freight train. But that morning they felt feeble and powerless. Every step I took I felt weak to my core. It felt like I was dragging my legs along behind me.

He checked on me often. But I didn’t have anything to give him. My brain worked only enough to continuously berate myself silently for ruining his trip after he had worked so hard to achieve all his goals in life. All he wanted, as a treat for this, was to have fun with me in the woods, but I couldn’t do it. I couldn’t even pretend I was enjoying it that morning. I couldn’t even pretend for him.

Adam sat on a log. I stopped walking and swayed on my feet. An energetic and very organized troop of ants ran in both directions just in front of the toes of my shoes. One carried a leaf four times his size. My body hunched forward against the weight of the pack and my hands hung down in front of me like a neanderthal. I didn’t care. I didn’t want to sit because then I would have to get back up. Adam handed me a piece of candy and told me I looked sad.

The pack didn’t seem so much like I was carrying it as it felt like it was riding me. Hard. I had to stop every fifty yards to just stand in one place for a while. I felt astonishingly weak. We were getting nowhere. The pack felt like punishment for being intrinsically lazy.

I was walking, slowly, one step at a time. He looked at me for a minute, turned around and said with exaggerated cheerfulness, “What do you think your trail name is?”

Everyone gets a trail name on the Appalachian Trail. Dawn, Hatchet, No Nutz, that sort of thing.

He didn’t talk to me much after that.

I was sad. I was sad from the top of head, to my finger tips and down into my toes. I was sad in every cell of my body.

There was a gorgeous, three inch wide, jet black, very pointy spider in the middle of the trail. I stepped over him. For some reason he made me sad too. After only ten miles of the world-renowned Appalachian Trail I didn’t want to do it anymore. I was beaten.

Then suddenly, the trail was flat. It took me probably a hundred yards to even realize this. As I walked on behind him, I lifted my head to see what the world around me looked like. The forest was beautiful. Fall leaves littered the trail. There was more color on the trees then even just the day before and every time the wind gusted thousands of perfect, crayon yellow leaves would fall from the canopy. They would slowly feather and helicopter to the earth around us. I checked in to see how he was doing. Though not nearly as much as me, I knew he was struggling too.

Far too soon we were going uphill again. I shrank back into the tiny cell inside my mind.

I had to pee. I tried to fight it. It was just another thing I couldn’t handle that day. Finally I threw down my pack. The weight that had been pushing me into the ground left my sad body and though I hadn’t had the same sensation the day before, I felt like I was floating away as I walked into the brush.

After that things flattened out for a while. It is remarkable how quickly all negativity dissipates when this happens. I apologized to him for the whole Sad Chicken thing and we talked and even laughed a little. We stopped needing to rest and we just walked on endlessly. We passed people, I smiled at them for real and not just so that they would not ask me if I was ok.

Suddenly it was just a gorgeous day to walk in the woods with the most amazing human animal I ever met.

We passed a family. The young boy was walking far ahead of the others. He looked so tired and so sad and also kind of mad. I wanted to hug him. I wanted to tell his parents they were horrible. But they we very nice to me and had big kind eyes and so I didn’t.

Once I realized we were coming up on the big hill, one far steeper and longer than anything we had yet done, I made him stop for lunch.

A fly buzzed around my wet, smelly head as I ate tuna out of a bag. When I was done, I laid down on the trail. Using my pack as a pillow I stared at the yellow canopy and watched the leaves fall around me. I heard acorns falling near the trial. One hit me on the forehead with an extremely satisfying sound. The leaves from the deciduous trees stuck in the evergreens like brightly colored Christmas ornaments. It was cloudy and quiet. I became cold as I waited for him to finish his Slim Jim and mine. Because Slim Jims, I found out that day, are extremely disgusting.

I wondered how bad this would get.

Adam packed up and together, we walked up a mountain. Which is where I decided that if I ever wrote a book about any of this it would be titled, Fuck this; An Appalachian Tale.