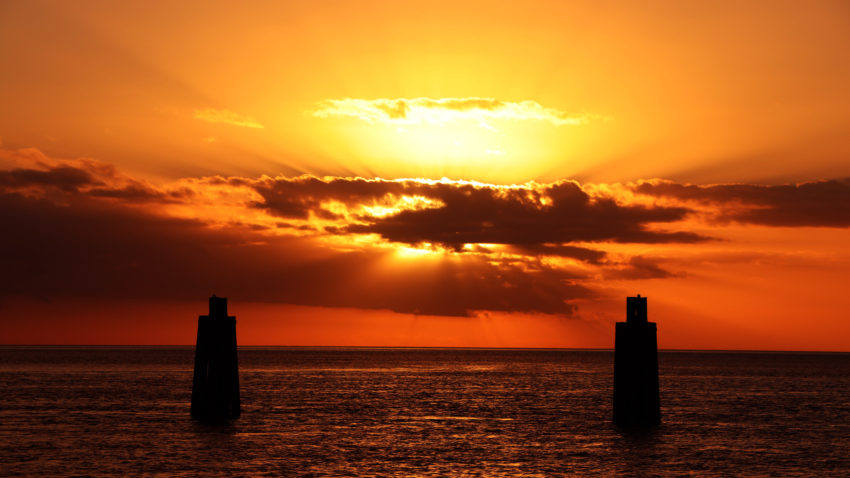 “Oh no,’ he said, coming into the cockpit. “I dropped a part that I needed in the water.”

He was already striping off his navy blue t-shirt in that sexy way guys do when they bring it over their heads from the back of their shoulders. He was, as always, totally controlled.

It was the beginning of shark hour. At a place they feed sharks to excite tourists. Every night three huge bull sharks circled our dock slowly, relentlessly. It was after sunset. They were here somewhere.

“It’ll only take a second, it won’t be there tomorrow,” he said. He  sucked air quietly between his teeth when he slipped into the cool water. “Don’t draw attention to me.”

We both scanned the area around the boat, then he glided through the water almost seamlessly.

I was watching him, and chewing my thumb nail off, when I heard a voice.

“You see another shark?” a women asked tipsily and happily as she sauntered onto the dock with a drink in her hand. I shook my head and looked around, anywhere but at him. I pointed at something on the other dock and opened my mouth to distract her…

“Oh My God,” she yelled. “Get out of the water! There are sharks everywhere!!” She rushed to the edge of the dock. “There’s one right there!!!” She pointed below her. By her voice I could tell she felt immediately gratified by its presence so directly following her warning. Sure enough, one of the sharks was coming around the neighboring boat. Fifteen feet from him. But he didn’t hear her.

Through about ten feet of water as clear as from the tap, I watched him grab the part he had dropped.

The shark made a sharp ninety degree turn. And headed straight for him.

“GETOUTOFTHEWATERGETOUTOFTHEWATERGETOUTOFTHEWATER!!!” Already somehow her yelling had drawn a crowd. They were all screaming and gesturing wildly. One of the men reached his hand down for Adam to swim to him instead of to the boat. But he hadn’t seen the shark. He thought they were projecting their fears onto his actions, as people often do to him. He swam gracefully toward the Talisman’s stern and swim ladder. He was completely unperturbed.

“It’s fine guys,” he was saying. “We swim with sharks all the time.” Which is true. But we don’t swim at the surface, where they feed sharks, at shark hour. And there was a shark heading straight for him and speeding up.

“I need you to get out of the water right now,” I said quietly.

He looked up into my face and immediately grabbed the back of the dinghy. Which just so happened to be parked on that side of the Talisman, though we had never kept Hemingway there before. I watched, horrified, as half my husband’s body slid under the dinghy while he pulled himself around it as quickly as he could. At the same time the shark swam under the other side. It was half again as long as Adam’s beautiful, board-short encased meat-sack.

I fully expected to hear him start screaming. I waited for the pain to register in his brain. They were both under a twelve foot long porta-bote and only the end of the nine foot sharks tail was showing. I was sure he was going to lose part of his body. I was so sure of it that I reached down to pull up what would be left of him. At that moment he did a spectacular, if not panicky, back flip up into the dinghy.

The shark swam out the back end of it.

It took about half an hour for anybody to get back to a resting heart-rate. 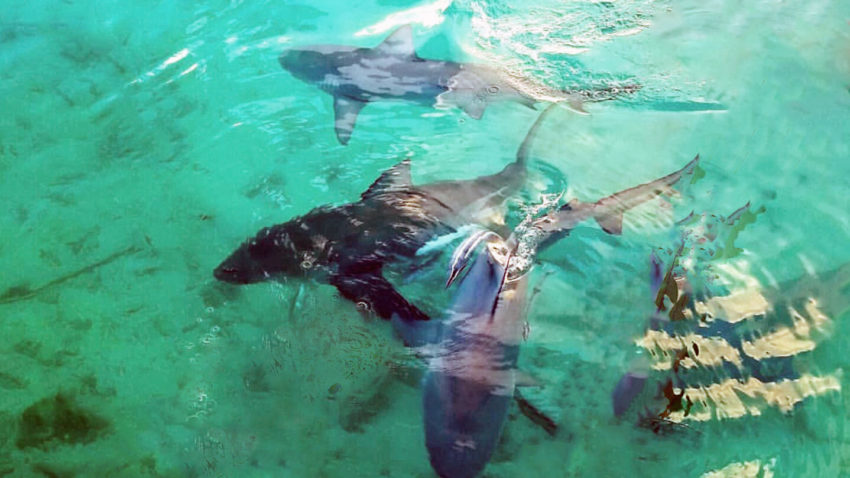